What Are the Most Common Aikido Attacks and How
Much Power Should You  Use? 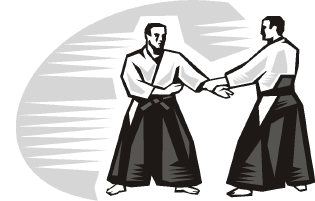 There are several basic Aikido Attacks that are used in dojo's around the world. Here is a list of the most common attacks...

Yokomen Uchi - open strike to the side of the neck.

Ushiro - these are attacks from the rear.


These are some of the most common Aikido attacks used in dojo training, but there are several more that may be used.

For example, front thrust kick to the groin or stomach, Round hook kick to the lower leg, thigh, torso, or even head, head-butt to the face, etc.

How Much Power Should
Be Used For Aikido Attacks?

Well, this really depends on the particular style of Aikido that you are practising, and also on what you are trying to achieve from it.

If you are new and aim to learn attacks and techniques, then it is best to keep power levels down low. This removes the fear involved, and allows you to work on the movements and repetitions, that will deliver the info in your body/mind.

Once past the beginning stage, you have a knowledge of Aikido attacks and techniques, then the power levels should be raised. This helps you to perform technique, while your posture and ability to move smoothly are slightly tested.

After you have good knowledge, then its time to attack harder. This raises the fear level, and encourages you to get it right first time. At this level you will also know if you are performing correctly, your technique will flow smoothly, or not!

The final level of attacks and defence, that many dojo's do not practise, is to...

This is where full power strike and grab Aikido attacks are used. You will learn, very fast, whether your block is correct or not, if it isn't you will get hit.

Training at this advanced resistant level helps bring martial spirit back into the art. It also raises your fear level, closer to what you may feel in a street fight.

Of course, the violence of a street fight is a whole new experience, that I hope you don't have to go through, but, it is essential to train for the possibility,

Its good to also practise attacks and techniques, as if it is for real. The closer you get to practising defence from powerful attacks, the more confident you will be.

If you fail to practise hard, then you will not have the tools required when that surge of adrenaline runs through you. You see, in the street there are no rules, and your attacker will not be compliant and fall down easily.

So I suggest that you train aikido attacks hard - But Smart!

You may also be interested in Self Defence Secrets