Onisaburo Deguchi was the Leader of the Omoto Kyo...
a Shinto Based Religion!

Although he is almost unknown in the West, he was an important religious leader of 20th century Japan, and a powerful force behind the Omoto Kyo faith.

At its height, there were about 2 million followers and it had a major impact on the political and religious affairs of prewar Japan.

Onisaburo's life was immense. He was a  writer, poet, calligrapher, sculptor, and ceramist, He left a vast cultural and artistic legacy.

Onisaburo Deguchi was a primary school teacher at the age of 12. He studied Honda Chikaatsu's 'Spirit Studies', he also learned chinkon kishin, which is a spiritual practise, from Nagasawa Katsutate in Shizuoka.

In a cave, at the top of a mountain called Takakuma, in Kameoka Japan, he experienced enlightenment in 1898.

He met Nao Deguchi, the founder of Omoto religion in 1898 and became a major figure in promoting the new sect. He married Nao's daughter Sumi in 1900, was adopted into the family, and was named Onisaburo Deguchi.

In 1908, with Nao Deguchi, he founded the Dai Nihon Shuseikai, which in 1913 became Taihonkyo, and in 1916 became Kodo Omoto. In 1923, he studied Esperanto, an international language, and introduced it to Omoto Kyo religion.

After the death of Nao in 1918, he became the central figure of Omoto.

Deguchi was imprisoned on several occasions when the Omoto sect was persecuted by the military government. He was in prison from 1935-1942, and made thousands of highly-regarded ceramic pieces.

He met Morihei Ueshiba, the founder of Aikido in 1919, while Morihei was travelling to Tanabe to his father's deathbed. Morihei developed  Aikido from his combat studies of Daito-ryu Aikijujutsu with Sokaku Takeda, and...

his spiritual studies with the Omoto Kyo and Onisaburi Deguchi. 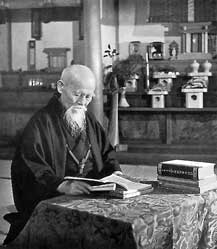 Onisaburo said it was humanity's duty to move forward together to a new age of existence on Earth, and achieving enlightenment in this lifetime.

He wrote the Reikai Monogatari (Tales of the Spirit World), which is an 81 volume work that covered his travels into the spiritual planes.

Onisaburo took pleasure in wearing richly textured costumes that he designed himself. He posed as a wide variety of Buddhist or Shinto deities (gods). He also dressed as a shaman, and even as female deities.

His outlook on life was often seen as outrageous, and he claimed to be an incarnation of Miroku Butsu (Maitreya Buddha), and would refer to himself as a...

Like many Omoto followers, he believed that the original kami founders of Japan were driven away by the gods of the imperial line, which meant that he challenged authority, but had the ability to hide it.

Nao Deguchi, on the other hand, was more open and direct in her statements. Onisaburo was good at calming government officials, while leading their efforts, that he found distasteful or amoral.

Onisaburo Deguchi's legacy is mainly concerned with art, including a wealth of works on calligraphy and poetry. He also worked in cinema, sculpture, and pottery, leaving 1,000's of items of great value.

Morihei Ueshiba O'Sensei was greatly affected by his spiritual studies with the Omote Kyo. His technique was already excellent, but after his association with Onisaburo, they took on an invincible quality. More info Click Here