Sensei Howard Popkin began training in Goshin Budo Jujitsu in 1979. He had training with many top Jujitsu instructors in the USA, but it was the Daitoryu Kodokai of Roy Goldberg and Kiyama Hayawo that he found most interesting.

Daitoryu Aikijujitsu is the parent art to many popular arts. The founder of Aikido, Morihei Ueshiba was a long time student of Daitoryu, as were the founders of Hakkoryu, Shorinji Kempo, Hapkido, and many other popular modern arts.

Howard was dedicated to studying with Okamoto Seigo Shihan, and travelled to Japan 35 times to study, including a 3 month stay in 2000. Okamoto visited the New York Branch of the Roppokai 3-4 times per year for extended training.

In 2009, Howard Popkin, went to Massachusetts to a seminar with Dan Harden. He realized that Dan's art was essential and officially began training with him. 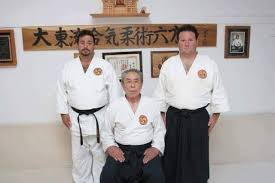 In October 2010, Sensei Howard Popkin and Sensei Joe Brogna resigned from the Roppokai, and began laying the foundation for Daito Ryu Aikijujitsu Ginjukai.

Daitoryu Aikijujitsu is a powerful system for self defence that uses connected body mechanics and soft movements to unbalance at the moment of contact.

The core of Daitoryu, is Aiki that offers skills that should interest martial artists. Aiki makes it possible to unbalance, redirect, and take control of an attacker, while using little or no muscular strength.