The Aikido Sangenkai is a non-profit martial arts dojo in Honolulu, Hawaii, affiliated with the Aikikai Foundation in Tokyo, Japan.

Aikido Sangenkai is a member of the Sangenkai, an association of groups and individuals across America, Asia, Europe and Australia that come from a wide range of arts and disciplines united by common principles of training.

Dan Harden's Shugyo Dojo in Spencer, Massachusetts, USA is headquarters of the Sangenkai, that teaches BodyWork Seminars around the world.

Training at the Aikido Sangenkai is based on principles, and not focused on technique repetition or structured Kata. The training aims to rewire the mind and body through focused intent to develop another way of moving.

A way of moving that responds differently to outside forces, and disrupts and destabilises the opponent in a way that creates non-resistance.

Christopher Li has trained in traditional and modern Japanese martial arts since 1981, with 12+ years of training, living in Japan. He holds certificates of rank by the Aikikai Foundation in Tokyo Japan, with ranks from Mitsugi Saotome Shihan, Ni-dai Doshu Kisshomaru Ueshiba and San-dai Doshu Moriteru Ueshiba.

Christopher translated for Moriteru Ueshiba Doshu at the Aikido Celebration held in 2011 at the Japanese Cultural Center in Hawaii. 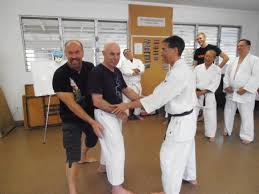 Aikido Sangenkai offers internal power conditioning. It has its roots in ancient internal power methods from Chinese martial arts to Indian yoga. The aim of Aikido is personal transformation through intense budo training.

Spiral movement, internal energy, the kundalini in Indian Tantra, and transforming your body into irresistible force. The 'sangen' are represented visually by the triangle - Man, the circle - Heaven, and the square - Earth.

The Aikido Sangenkai is closely associated with the Sangenkai and Dan Harden, who conducts bodywork seminars around the world.