Can You Use Aikido Strategy
to Avoid Confrontations? 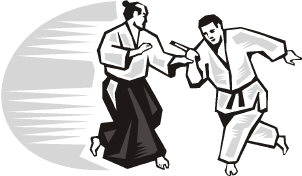 Advanced Aikido strategy offers you a systematic plan of action.

The tactics you decide to use should be influenced by technical skills. You can certainly learn how to avoid or evade an aggressive confrontation.

Good strategy is about responding to your opponents attack. Thinking beforehand about what your opponent can potentially do, would be...

By being at the creative edge of awareness you will develop the sensitivity to notice very small changes in your environment. This advanced Aikido strategy allows you to read what is about to happen, and...

Respond at the right time!

It depends on your level of skill, but also relies on your mental ability to apply the tools you have. It is about creative action, and not just reaction to events.

One good strategy is to present a target to your attacker. If they see an opening in your defence, they are likely to react to it. You will then be able to predict their movement and deal with it effectively.

A reaction is an instinctual, habitual, unthinking action that happens naturally. Aikido strategy is a planned response, to a series of predictable attacks.

The problem is that this has to be repeated thousands of times before you can use it as a response to an attack.

If you learn how to offer a weak target to your opponent, then, when they react to it, you will be able to respond with your planned Aikido strategy. This is good Aikido training, leading to advanced Aikido practise.

Of course, this level also includes the ability to be free of any thought and respond naturally, in the best way, to the circumstances you are in. So too much strategic planning can stop your natural flow of energy.

A straight full-on attack, often involving anger and rage, carries a lot of energy. Trying to stop this energy or reason with the attacker is difficult. Just stay calm, get out of the way, and redirect the energy.

A more circular, indirect attack, may come from someone who smiles to your face, but has other intentions. This may involve a sudden surprise attack, or a sneaky attack from behind.

If you feel uneasy around someone, then this could be an indication.

Other attacks may be less physical, but can damage you in a more subtle way. With feints and jabs that are not committed attacks, there is no reason to over-react. Just use correct distance, parry and be prepared for their full attack!

If someone has grabbed hold of you, how did you allow that to happen? Anyway, don't resist, this just gives them more to grip onto. Just relax, feel for an opening, and use it to break their balance.

There is also the sucker punch, with no reasoning behind it.

You may try to compliment someone, and they take it the wrong way and just explode an attack. If you respect all other people, and are careful what you say, and how you say it, then this is less likely.

In advanced aikido strategy, you deal with energy movement, rather than solid power. So there is always a way to avoid direct energy and lead it safely.

Remember by keeping correct distance, your attacker will have to choose between letting you go or attacking full on. Then, you can respond with your Aikido move. Use patience and skill to draw your opponent in.

How many Instructors, or students have you met, that have had a street fight?

So, it appears that just by learning Aikido, it  turns us into reasonable human beings. This is an advanced Aikido strategy!

One other important pointer, is that in life we get what  we expect. So if you expect the best, that is what you will receive :)

Aikido Strategy Success Blueprint offers you a gold-mine of wisdom!

Know the Area - is it known for street crime? Is there a lot of gang activity? Do buses and taxis go there after dark? Is it an area you should avoid entering? If it is, then don't go there. It's that simple.

Stay Alert - walk with purpose, be attentive to your surrounding environment and be prepared mentally and physically for an attack, by having Aikido strategy.

Expect The Unexpected - Wear shoes and clothing that are comfortable that allow you to move quickly. Carry only the essentials, travel with friends, have your mobile phone set with the speed dial set to emergency police support.

Move Silently and Swiftly - while blending into the background. Dress like the locals, and don't display large sums of cash in public or wear highly visible and expensive jewellery or clothes.

Don't let strangers to stop you on the street for conversations, to give directions, or to light a cigarette. These are often techniques used to set up an attack.

Avoid Trouble and Hide Your Intentions - If you are confronted by a mugger or gang, co-operate with them. Be polite, even if you feel angry and believe you could overpower them, it is essential that you pretend to be intimidated.

This will allow the robber to relax his guard, then, if you feel you have no alternative, launch a pre-emptive attack.

Evade and Escape - When overwhelmed, don't fight, surrender, compromise, or run. Try to get a good lead and run towards lighted and crowded areas.

Choose the Place of Battle - Never allow an assailant to take you to another location, as there's usually an ulterior motive, a greater advantage over you.

It is only when all of your strategies and tactics have failed, that you have to resort to the use of full power devastating techniques.

Personally, I have made an intense study of Aikido for over 30 years. I have also looked at, in depth, the advanced principles involved. Plus I have studied self defence, power development, and pressure points.

I founded the Arun Aikido Club in 1992 in West Sussex, and am the chief instructor. I also offer Self Defence Seminars and Private Lessons

I had many insights in 30 years of study and practice. It led me to write:   Aikido Success Blueprint  Optimum Health Secrets and Self Defence Secrets

I highly recommend the fighting strategy employed by Master Russell Stutely. I am a fully qualified Pressure Point instructor in his system.

I have several of his dvd's and strongly suggest that you get your hands on his amazing product titled... Multiplied Force Fighting System (MFFS).