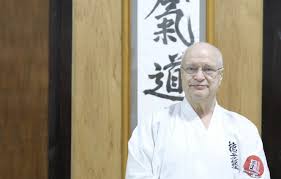 George Ledyard Sensei is a 7th Dan aikido teacher with Mitsugi Saotome Shihan, who was an ushideshi of the Aikido founder Morihei Ueshiba O-Sensei.

George began his study of Aikido in 1977 under the direct instruction of Mitsugi Saotome Shihan. He currently holds the rank of 7th Dan in Aikido and Shodan in Daito Ryu Aikijujutsu under Howard Popkin Sensei and Joe Brogna Sensei.

George Ledyard Sensei was made a member of the Ueshiba Juku by Mitsugi Saotome Shihan. This is a direct lineage of transmission from Aikido founder  Morihei Ueshiba, through Saotome Shihan to his personally trained students.

George founded a system of police and security training which specializes in protective control, which is a low-level force system for physical intervention.

As part of the 2015 Kagami Biraki promotions and celebrations, George Ledyard Sensei received his 7th Dan from Mitsugi Saotome Shihan.

George believes that Aikido should be a spiritual and martial practice. He is known for his use of the jo staff and sword and has an innovative approach to technique from training Japanese Koryu, Iaido, Filipino arts and also Systema.

He has over 35 years of Aikido teaching experience, including leading Aikido seminars around the world. He was invited to participate in the first three historic Aiki Expos and is also a regular contributor to both AikidoJournal.com and Aikiweb.com. He is also the author of many Aikido instructional DVD's

After the 2nd world war was over Aikido practice was finally open to the public and taken from Japan to almost every country in the world. Aikido Eastside  have chosen to make Aikido practice available to students of all ages.

George Ledyard Sensei is among a small group of instructors and students who focus on training a connected body. This is instead of the focus on the outer form (kata) and hundreds of physical techniques.

I have included George in this elite group of Aiki teachers, who, in my opinion, are at the leading edge of the future of Aikido.