Master Gozo Shioda (1915–1994), was a Japanese martial artist, Aikido teacher and the founder of the Yoshinkan style of Aikido.

Shioda, a young student of judo, was thrown by Morihei Ueshiba O-Sensei after an Aikido demonstration, he became one of his students in 1932.

He also studied aikijujutsu and known as one of the most 'fiery and vigorous' Aikido students. In 1961 he was awarded a 9th dan rank by Morihei Ueshiba.

Gozo's father was a keen judo practitioner who had his own dojo called the Yoshinkan. Shioda was a black belt in judo by the time he entered high-school.

He attended Takushoku University but left to train as a full-time uchideshi at Morihei Ueshiba's Kobukan dojo. The site of the Kobukan is now the Aikikai Hombu Dojo. This was the first official dojo of what later became aikido.

It was called Aiki Budo.

In those days, aiki budo was still a very hard martial art and training at the Kobukan was intense. It was this kind of training that Gozo Shioda loved and strove to preserve when he later founded the Yoshinkan.

Gozo Shioda and several other uchideshi would visit Tokyo at night picking fights with various gangs to test their skills, despite being forbidden by Ueshiba.

In one incident, Shioda and a fellow deshi got into a fight with a gang of about 30 yakuza. He was able to defeat the gang by bringing down the leader first. He said it was an essential tactic in a fight against many.

He trained under Ueshiba for a total of around ten years. He was posted to China in 1937 as part of the Imperial Japanese Army. During this time, he had several opportunities to really test his martial skills for real.

In one incident, he was drinking with an army friend of his in Shanghai when his friend got into an argument with a local gang member, who called 3 others to help him. They were intent on killing them, who were cornered inside a room.

In the ensuing fight, Gozo Shioda broke the leg of one gang member, the arm of another, and finished off another by punching him hard in the stomach, using...

He described it as "aikido enlightenment", and stated that you could appreciate what aikido was about once you had used it in a life-or-death situation.

Aikido Success Blueprint offers you unique tips on how to fast-track your skills to a completely new level. A massive collection and gold-mine of knowledge! 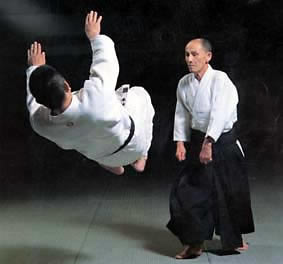 Gozo Shioda returned to Japan after the war and completed his formal aikido training. He began doing demonstrations of his art...

to police departments and army units.

This led him to opening his own Yoshinkan dojo in 1955 in Tokyo. The dojo is now situated in Shinjuku, Tokyo.

Yoshinkan aikido has spread around the world and there are 100's of dojos affiliated to the IYAF, International Yoshinkai Aikido Federation, the central organizing body. Famous people have visited Yoshinkan Hombu dojo, including Robert F. Kennedy and Mike Tyson.

Yoshinkan is known as being a hard and dynamic style concerned with the practicality, but also remaining faithful to the ideals of peace and harmony...

As laid out by the founder.

Arun Aikido Club, founded in 1992, based on the training method of Yoshinkan. They offer unique aiki principles, self defence seminars, and private lessons.