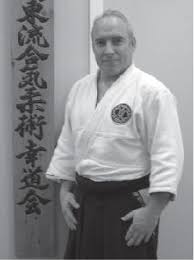 Daito Ryu Aiki Jujutsu has a core principles to focus on subtle balance control that could complement and improve a variety of martial arts.

It has influenced many arts, like Shorinji Kempo, Hakko Ryu Jujutsu, Hapkido and Aikido, whose founder Morihei Ueshiba trained extensively in Daito Ryu.

Roy has trained 40+ years with Kiyama Shihan and leading Shihan from Japan. He was awarded the rank of 7th Dan and certified Kyoju Dairi by the Kodokai.

Goldberg Sensei aims to share this excellent art with people who are willing and prepared to dedicate themselves to hard training.


In June of 2016, hombu dojo presented Roy Goldberg Sensei with the the 3rd scroll in the transmission of Daito Ryu Kodo Kai. He is the only non-Japanese to earn a 7th Dan and the third scroll from the Hombu Dojo in Kitami, Japan.

He continues to train under his instructor Kiyama Shihan and believes...

“ in the martial arts, one teaches

only to continue his own unfinished study ”

Roy Goldberg Sensei has a focused goal to preserve, protect and pass on Daito Ryu, a secret art and National Treasure of Japan, only to serious students, just as Kiyama Shihan shared it with him.

Before becoming Kiyama Shihan’s student, Roy practiced Miyama Ryu Jujutsu under Shihan Antonio Pereira for thirteen years in the Bronx. It is a combat  system of Jujutsu based on Takenouchi Ryu, Sosuishitsu Ryu, Judo and Aikido.

Roy Goldberg Sensei continues to study knowing that this path is the only one to follow. One of Kiyama Shihan's greatest lessons is...

" You have already walked through the door

and there is no coming back, just Shugyo "

Daito Ryu Aiki Jujutsu was founded / re-introduced by Sokaku Takeda. He had a few top students who became masters in their own right.

Among the other masters are... Morihei Ueshiba  and  Yukiyoshi Sagawa