Practical Aikido for Law Enforcement Has To Be Effective and Efficient!

What is the most practical Aikido for law enforcement purposes?

How can the art be used as police Aikido?

Police defensive tactics are very different from self-defence. The aim is to assist an officer in their performance of arrest and restraint, and to increase the margin of safety for both the officer and suspect.﻿﻿﻿﻿﻿﻿

Martial arts classes include practical tips﻿﻿﻿﻿﻿﻿﻿﻿﻿﻿﻿ for ﻿﻿arrest or restraint. But these would need to be adapted to the street for police officers to find useful.

A practical Aikido for law enforcement course would need to focus on protecting the officer and assailant from physical or psychological harm.
﻿

Law enforcement officers are at a very high risk of having to deal with the psychological effects of defending themselves on a regular basis.

Aikido places responsibility on protecting the attacker it make it an effective art for short-term protective tactics and long-term stress management.

Gozo Shioda Sensei began teaching Aikido to the Metropolitan Police Department in Tokyo in 1960. They were teaching special Aikido courses for members of the elite Riot Police from 1964, and officially started teaching female police in 1972.

Yoshinkan Aikido is the only style officially recognized and studied by the Metropolitan Police. Every month, Instructors from the Yoshinkan Hombu Dojo, visit the dojos of the Metropolitan Riot Police to teach.

Taiho Jutsu means "control and restraining" techniques, and was created for the Japanese police force in 1947 and includes the study of unarmed, baton, handcuffing and forcing a prisoner to their feet.

The Shudokan Taiho Jutsu system is based upon techniques from Yoshinkai Aikido (the system taught to the Tokyo Riot Police), and techniques from Goju Sabudokai, Hapkido, Japanese Jujitsu and Ninjitsu.

My Advice on Practical Aikido For Law Enforcement 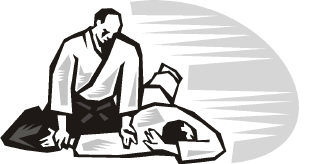 Some of the most simple techniques are the best choice of practical Aikido for law enforcement. Following are some of the most efficient methods to use.

Of course, your choice of technique depends on the seriousness of the situation, and the likelihood of strong resistance.

In many countries, police arrival, ensures everything calms down and minimum force can be applied. Others are not so fortunate, and heavier tactics are used.

Here are my suggestions...

1 - Developing an awareness of your surrounding environment. Learning how to observe with a 360 degree viewpoint... to avoid rear attacks.

2 - Being able to quickly move forwards, backwards, side-to-side, and diagonally... without losing your balance.

4 - Knowing when the right time to arrest or detain a suspect arrives, in order to avoid any escalation of violent behaviour.

6 - Having the skill to cause pain without causing injury. Aikido for law enforcement use techniques of control, with additional use of pressure points, to affect the suspect fast.

7 - Using the minimum amount of force to get the job done.

8 - See my Self Defence Secrets for full details!

Aikido for law enforcement will be far more effective if there are several officers present, and will include the following...

1 - Unbalancing techniques to reduce a suspects resistance. This includes energy to the third point, which makes the suspect lose their balance to the front/rear.

2 - Controlling the head or arms can be used to effect this quickly, which helps when taking them to the ground, before securing.

3 - Pressuring the upper body in one direction, whilst stopping the legs from going there will get someone down efficiently.

4 - The ability to move the suspect into a position where their chance of reaching you with an attack, is greatly reduced. This can be done by controlling their arms, via the wrist, elbow or shoulder.

These are just a few ways to successfully control a potential attacker. But, of course, it is far more difficult for Aikido law enforcement officers without some of the tools available in general self defense terms.

My studies led me to the work of a great instructor, who helped me feel a lot more confident about using my Aikido skills. He also teaches how to truly speed up the learning curve by reducing his methods down to the essentials...

He spent years at the cutting edge of real combat. Many of his students are doormen, security, and military, who need the very best training to stay safe. He  developed a fantastic curriculum that enhances Aikido for combat situations.

His name is Master Russell Stutely, who is acknowledged as Europe's Leading Authority on the use of pressure points in the martial arts.

He has been instrumental in dragging traditional martial arts into the 21st century. He is a regular columnist for Britain's most prestigious martial arts magazines, Martial Arts Illustrated, Traditional Karate and Combat.

Russell is in constant demand on the seminar circuit, teaching his proven methods of the correct use of Pressure Points and Power in street  self defence.

In 2010 I qualified as a Pressure Point Self Defence Instructor under Master Stutely. This was after an intense training programme.

I highly recommend his methods, and teach them at my Self Defence Seminars in Bognor Regis, West Sussex, which is on the South Coast UK