How to Wear Aikido Hakama and Also Fold It Correctly! 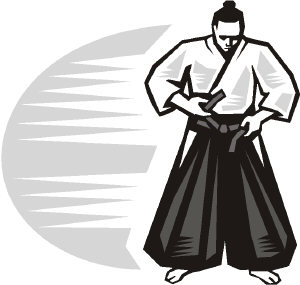 The Aikido Hakama, aikido apparel you choose to use says a lot about you. You'll need a hakama that is good quality, and will survive heavy training.

If you buy cheap training aids, they will not stand up to hard consistent practise, so it is vital that you get the best quality item... plus they look so much better :)

Do you want good quality hakama, gi & equipment for both traditional and modern martial arts? You may also need tanto (knife), bokken (sword) and a Jo (staff) that will withstand impact? Check out my recommendations below...

Hakama are skirt-like pants that are usually worn by students who have reached the level of black belt. Although in some groups they are worn earlier.

The founder of Aikido, Morihei Ueshiba O-Sensei insisted that everyone wear the hakama, he lived in a time and culture where it was standard formal wear.

But because of cloth shortages, it was decided (temporarily) to begin only wearing it from black belt level. This never changed in most associations.

There are 7 folds in the hakama, 5 in the front, and 2 in the back. They encourage you to reflect on the nature of true budo.

Wearing it symbolizes traditions that have been passed down for generations. The pleats symbolise the seven virtues of budo...

Hakama are also part of the every-day wear of Shinto priests who maintain and perform services at special Japanese shrines.

If you want to purchase good quality hakama, aikido apparel, and equipment for both traditional and modern martial arts, check out recommended items...

How to Wear and Fold
an Aikido Hakama