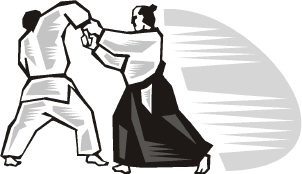 Aikido Pressure Points can be used to make your techniques far more effective.

Used for self defence to control an aggressive attacker. Plus pressure points are great for balancing your body's meridians and boosting your energy flow.

Most techniques have the potential for an aikido pressure points strike. These can be useful in reducing the strength and focus of your attacker, to give you an opportunity to apply a controlling technique or successfully escape.

If the technique chosen, is the correct choice in the circumstances, and has perfect timing, then a pressure points strike will not be necessary.

So, we need this information...  even if it is just a back up!

In Aikido, 'Atemi' is the term used for a distracting strike to give you an advantage over your attacker. When distracted the attacker may focus on your hand, or their pain, rather than their strike or grasp.

In this context, you could regard Atemi as 'Ki energy disturbance'.

You may not even need to touch the attacker with your atemi to upset their physical and psychological balance. Some claim that the best way to unbalance an attacker is to deliver a real strike, especially where there is potential for...

Atemi does include a wide range of applied force, from striking without touching to striking vital aikido pressure points to cause unconsciousness.

Knowing the different effects that a strike on various parts of the body can have, it can certainly improve your technique and self defence skills.

The largest weapon available to You, wherever you are, is the planet Earth itself. Hitting your attacker with this weapon, by unbalancing them, so they fall down, will gain you valuable time to retreat or take control.

You can save a lot of study time, by learning from the best Instructor of pressure points in the martial arts. In my opinion, Master Russell Stutely offers the best information on the subject, it...

How do I know?

I have personally trained with Russell.

Its discussed, in detail in my Aikido Success Blueprint

Aikido Pressure Points
and Self Defence

These are not usually practiced in mainstream aikido, but some dojos (training halls) use a great deal of pressure point study in their curriculum.

Yonkyo/Yonkajo (wrist/arm technique) is often discussed in association with particular aikido pressure points on the forearm. There is also a point on the inside of the lower leg (spleen 6) to which this same technique can be applied.

Knowledge of pressure points increases your awareness of the connections within the body and provides a more precise manipulation of an opponent. There are also many healing applications associated with these points.

Here are some suggestions on pressure points for self defence...

1 - Experiment with spots that you know from past experience hurt. For example the mastoid process is the soft spot behind the ear. Press that indentation lightly to feel the pain. Also, above the inside of the elbow.

2 - Join a martial arts class that focuses on self defence. Good classes include pressure points in their training. I offer Self Defence seminars

4 - Watch videos of real fights or something that has a few aspects of realism, like UFC. If you see someone cause pain by hooking a thumb under the jaw, that should give you a beginning point for experimentation (on yourself)

5 - Read more articles on the subject and take notes.

6 - Save Yourself years of study and learn from the best. Master Russell Stutely is THE best aikido pressure points instructor... Effective and Easy-to-Apply!

There are many areas of the body where intense pain develops when they are attacked. At these points, energy can be transmitted into a nerve very effectively, and as a result, they are known as pressure points or nerve centres.

Pressure points occur where a nerve branch connects to a major nerve pathway or where several major nerves join together to form a nerve plexus.

When such a point is stimulated by pressing or striking, the resulting pain registers on more than one nerve pathway. As a result, the brain receives signals from multiple nerves and the pain felt is amplified.

In Martial arts, nerve centres or pressure points are used to disable and to defeat opponents. However, the same points are used in acupuncture and acupressure to heal the body and to restore balance and harmony.

Different aikido pressure points respond to different kinds of stimulation. Some respond to striking, others to pressing or rubbing. In addition, the angle at which a pressure point is attacked is critical for proper activation.

In many cases, the full effect of pressure point activation can only be felt if the angle of attack is such that the entire nerve plexus or connection is stimulated. Proper angles of attack together with specific methods of stimulation... work.

These points are used to quickly control or incapacitate an opponent.

Activation of an aikido pressure point can cause excruciating pain capable of making almost any adversary back down. When the point is released, the pain subsides. Therefore, compliance can be gained without inflicting serious injury.

I have trained with Master Russell Stutely, who has been acknowledged as the leading authority on the use of Pressure Points in the Martial Arts.

He is one of the top sources of inspiration in street effective pressure points, and has been instrumental in dragging Traditional Martial Arts kicking and screaming into the 21st Century. Since 2010, I have been a...

Fully qualified and certified pressure point self defence instructor under master Russell Stutely. I use and teach these skills in my aikido classes and also on my Self Defence Seminars in Bognor Regis west Sussex UK

Or check out Self Defence Secrets - ancient secrets and master strategies!